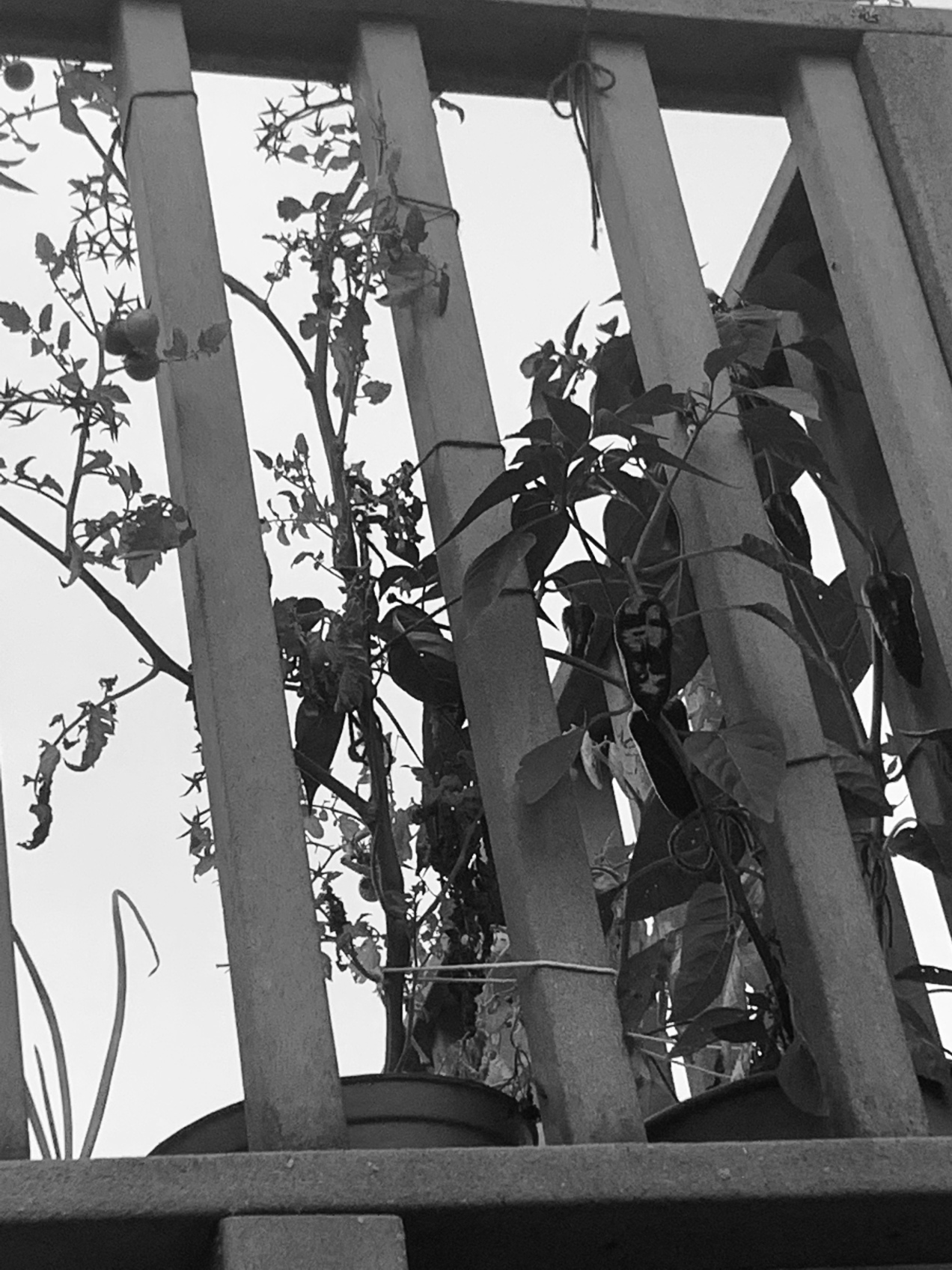 The girls are out for errands after going to church. Peter’s still sleeping. I’m alone at the dining room table, looking out through the screen door on a rainy Sunday morning. The poblano plant is finally starting to sprout. “Look at them … they are mutants!” Emma gushed when she went out to inspect earlier this morning. Until she said it, I hadn’t noticed. But they’re now the size of chubby toes, and have finally caught up to the jalapenos we’ve been enjoying the past couple weeks.

The porch garden was foremost among Emma and Karry’s experiments this summer. My wife suppressed her pessimism born of past failed backyard garden attempts sabotaged by the gluttonous cemetery deer who, for years, have roamed and ravaged our neighborhood as expectant as tourists with lobster bibs. Her youth nourished by lush family gardens in the country, Karry fully indulged Emma’s initiative. As my wife is a resigned realist, I found her sanguine act significant.

So they rimmed the perimeter of our porch with seeded planters of tomatoes, lettuce, green beans, jalapenos, poblanos and onions. Neighbored them with basil, oregano, spearmint, and cilantro. For months, Emma dutifully tended her little green village daily. The monitoring of progress has elicited from the girls consistent spasms of giddiness. I know this not from direct participation, but through the evening glee that wafts through the screen door back into the house. Admittedly, some subjects have fared better than others. But even the humblest of harvests have brought small joys.

Before succumbing to the pounding, parching sun, Em’s lettuce planter yielded just enough for one fleeting dinner table appearance, spread amongst three tiny ramekins, fishes-and-loaves style. I can’t remember what the main course was that evening. I just remember that the smaller-than-side-salad portion coaxed from everyone an unspoken, careful curating of their favorite salad garnishes to honor the humble, 15-feet, porch-to-table provision. Em, a purist, added but a few croutons without dressing, as is her custom.  Peter — decidedly anti-vegetable, but onion-tolerant – went Vidalia, sprinkle cheese and crouton dressed with Olive Garden Italian. Me, onion, cucumber, carrot, green pepper, crouton and a little bleu cheese dressing. We chewed slowly, savored. For maybe the first time in my life, my taste buds listened for what the lettuce had to say. Our eyes widened involuntarily the way they sometimes do when you experience something surprising and singular.

While the pluck-able portions have been consistently small in size and amount, they have been consistent. We’ve regularly dressed and seasoned dishes with tiny onions and tomatoes, basil and oregano. Minted tea. And Em has dried and jarred herbs for the fall.

If one evaluated Emma’s investment of time against the output, profits would be deemed meager by the objective measure.

But there are many subjective lenses to such measures.

Family was prepping dinner the other night. Emma, as she’s been for the past few months, was in complete command. She suggested I make guacamole, and offered to coach. Not that I don’t know how to make guacamole, but Emma has so elevated our eating the past few months, I readily accepted the internship. She ordered me to go pluck a jalapeno from the porch. My eyes got wide. I had not previously been issued security clearance for porch harvesting, though I’d been tantalized on many occasions through the screen door. Sliding the screen open I found vines full of jalapenos. So Pete picked a pepper, and went about crushing the garlic, squeezing the lime, chopping the onion, mashing the avocados. “Lumps are OK,” Em counseled. Ceremonially, I saved the jalapeno for last.

In doing so I learned that, what our tiny porch jalapenos may lack in size, they more than made up for with absurdly violent heat. After putting the finishing touches on the guac, and setting it down on the table to enjoy with the sublime buffalo chicken taquitos that Emma and Karry prepared, I noticed that, of all things, my eyebrows were burning. I’m not sure how, when or why, but at some point in the proceedings,  apparently I used my jalapeno hands to deep tissue massage my entire forehead. Given that my brother has long pointed out that Riddell men don’t have foreheads – we have fiveheads – that’s a lot of real estate.

I eat guacamole like I eat popcorn, with a constant — what some in my family refer to as a “primal” — shoveling motion. In the process, the jalapeno that was laying waste to the countryside north of my nose and south of my hairline was now fully carpet bombing the inside of my mouth.

My family’s unanimous affection for my guacamole was also intense, but not as intense as the pleasure they took from my suffering.

Peter: Padre, you OK over there?

Emma: Why is Dad making those sounds?

So, evidently, I was making involuntary grunting sounds as an autonomic response to the pepper’s spice. This happened to me only once before, when I did the Philly Cheesesteak tour and over-served myself from the drums of cherry peppers adorning the condiment bars at Pat’s and Geno’s. My companions at that time also found my guttural sounds unsettling. To get you in the ballpark, imagine the early stages of one transforming into a werewolf … if the werewolf had also accidentally set himself on fire.

My impromptu, one-man dinner-theater performance aside, my pain wasn’t the price of the jalapeno. It was its payoff.

That’s been the most precious and elusive commodity for me over these past five months. Pummeled, numbed, distracted by the weight of all the chaos, uncertainty and insanity of the present moment at work, at home and in the world.

In my search for medicine for this moment, which has taken me to destinations both darker and lighter, I’ve been finding light in the Anthropocene Reviewed, John Green’s incandescent, exquisitely crafted podcast (where he dryly and wryly reviews elements of the human-centered world on a five-star scale). On the recent episode where he announced he’s placing the project on temporary hiatus, he shared what the podcast has meant to him over the past few months. “Maybe the most important thing (the podcast) has given me is quiet,” he wrote. “My life has become so unbearably loud, and so oriented around being loud.” The exercise of the podcast has “helped me pay attention to what I pay attention to.”

So, in looking out my window on a quiet, small rainy Sunday morning at a poblano plant with toe-sized peppers persistently, insistently, waving gently in the rain, I discovered … a harvest.

In the act of carving out a small space, putting a stake in the ground, planting seeds, and tending it to see what might grow.

Planting a garden where no soil exists is an act of optimism. An act of persistence. An act of defiance.

A reminder that these days, real truth often exists in inverse proportion to volume…

… in the whispers of small things blooming beautiful in small spaces.

To listen to what the lettuce has to say.