Facebook reminded me of the post below from two years ago, and it brought the requisite smile (it’s one of my favorite scribbles).

A RANDOM ACT OF MAGIC — Was kinda’ a rough school/work week for my daughter and me. So we made plans after we finished our Friday to go for tea in the morning at our favorite place down the road.

Got up to a beautifully gray, autumn-crisp, drizzly, no-hurry Saturday (the BEST kind). She changed her mind about eating breakfast at home (so we could leave earlier) and was dressed and ready by 8:45. She had her Harry Potter shirt on, and after seeing me grab my Star Trek tee off the floor, informed me that that just would not do. She walked over to my closet and handed me my Potter shirt, the one she bought for me a few months back.

I’ve learned not to argue with any woman bent on dressing me.

Earlier in the week the teenager decided to appropriate the purple hand chair from the game room to his pending-manhood cave. The purple fingers had served as the downstairs hat rack. Fumbling, I couldn’t find where he’d parked the displaced hats.

Not wanting to keep my girl waiting, I was forced to leave the house with my ‘fro unkempt.

I’ve also learned not to keep the lady waiting.

Me: Got the book?

Me: Didn’t bring the cups?

She: (nonchalantly): Not this time.

The full ritual consists of her bringing the truly awesome set of Alice in Wonderland tea cups and saucers that her former baby sitter gave us in the spring, into which we pour the hot tea the young baristas serve us.

As an aside, I always wanted to be the guy who brought his own pool cue into the bar.

I turn as many heads, though, being the Dad who brings his own teacups into the coffee shop.

There were a couple people in line when we got there, giving us ample time to peruse the case displaying the rows of fresh cookies and muffins.

Iced green tea for Em. Toasted bagel. She laid claim to their last two pumpkin cookies (one each to bring back for her mom and brother. She’s the family’s thoughtful one.). Small coffee for me, and a breakfast sandwich that they panini press with love.

She asked me to read while she sipped and snacked.

We’re just past halfway into the fourth book in the H.P. series (The Goblet of Fire). A good number of the pages have been joyously read aloud Saturday mornings (and perhaps more than a few with our ever-improving British accents) at the tea shop’s tall table. It’s a common enough occurrence that when I recently popped into the shop solo, Emily, one of the regular baristas, asked me where the “little muggle” was.

As far as the book goes, the 44-year-old and 10-year-old unanimously agree it’s the best entry so far.

It’s the one where the main characters start to notice that they are boys and girls, and Rowling does a really nice job of re-creating the first awakenings of all those awkward and exhilarating moments (for which I unapologetically remain a complete sucker).

Em and I are so into it that when Hermione appears at the ball for the Tri-Wizard tournament, revealing the date that she had so suspense-fully kept a secret from Ron and Harry, I turn from the book to say the name directly to Em. “No way!” she says. And we gossip for a good minute before returning to the pages.

We finish the chapter and Em decides it’s time for us to sample the pumpkin gelato. We share a taste off the tiny plastic white spoon and Em decrees that, while good, it can’t hold a candle to the salted caramel.

I’ve learned not to get in the way of the lady when it comes to sweet things.

We resume reading, and are so sucked back in to the story that we barely notice Emily (the barista) leaving the counter and crossing in front of us to climb on top of the shelf behind the more comfy recliners in the back of the shop to adjust the sound system.

I’ve been at the shop in the past where the satellite radio craps out and the girl or woman at the counter has to literally scale the wall to adjust the receiver, which is a good 12-14 feet of the ground. Just adds to the local shop’s character as far as I’m concerned.

It’s a regular enough occurrence that Em and I didn’t think twice about it.

Until a couple pages later, when Emma looks up from her pages, her eyes wide as our ceremonial saucers. She turns to me with just the biggest grin on her face.

“Listen!” pointing into the air.

“You know what that is?”

I’m my typical two steps behind her.

“That’s the music that they play at the beginning of every Harry Potter movie!”

Sure enough, my ears register the epic score.

We about fell off our broomsticks.

I’m not sure I can conceive of a more thoughtful gesture than Emily climbing the wall to add to what I had been convinced was an already perfect ritual.

I walked up to the counter, and exchanged knuckle touches with our new favorite barista.

Emma was still over the moon. “How did you do that?”

Emily: “It’s a playlist on Pandora. I went with Chamber of Secrets. A little more upbeat than the Deathly Hollows.”

To have a waiter or waitress know your order when you walk in is one thing. To have one curate a soundtrack for you?

Returning to our chairs, the music made the next couple chapters pass by in cinematic fashion. We lost ourselves in the pages.

In a word, it was magical.

One of those moments that I knew on the spot that I will never forget.

Just to be safe, though, I napkin-sketched it for posterity. 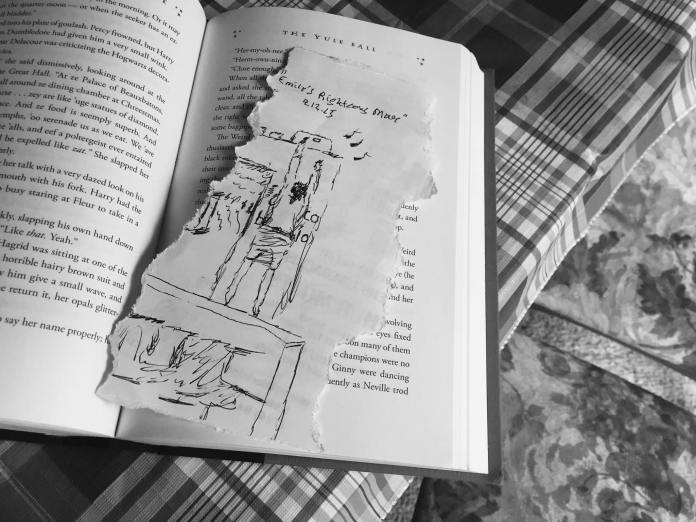 But I didn’t need the reminder, because two years hence, the hasty Pen-Sketch spell I cast that day that transformed a napkin into our bookmark is holding strong.

Each and every time we’ve cracked open the sacred text since, we’ve been reminded of ‘Emily’s Righteous Move’ marking our place. As an aside my daughter and I are proudly pursuing the Guinness World Record for the slowest progression ever through the Harry Potter series. We are presently savoring our way through the final installment, The Deathly Hallows. Knowing the end is approaching, we are treating it (in advance) like a victory lap. We read aloud to each other mostly in small doses these days. A few pages here. A chapter there. On rare occasions, she’ll beg for a stretch beyond a chapter when we catch a groove. She doesn’t have to twist my arm.

I’ve grown to love scarcity. Finite amounts. Beginnings and endings. As a counterweight to my deep desire for things I love to last forever, I’m learning to look forward to things, to appreciate things in the moment, to enjoy them as long as possible, and to kindle and cherish their memories.

There is only beauty because of death, the poet wrote.

Knowing the clock is (always) ticking intensifies and focuses our emotions, ensuring we invest them preciously, intentionally.

That’s why I love the seasons. Even though I lament their passing from one into another.

So, on the occasion of my birthday, I find myself thinking about bookmarks.

I love the work of a bookmark … marking the place where you left off … so you’ll know where to pick up and move forward.

But I’ve also been known to use a bookmark to mark a place I know I’ll want to return to. I recently violently edited my bookshelf downstairs, during which I came across the various journals I’ve kept from different points in my life. Looking back, I see those journals as bookmarks … places where I’ve left off along the journey.