[So, the past couple months? Pretty much a blur. Am a little overdue in taking my existential crisis in for a tune-up. Need to remind myself to pump the breaks a bit more often in 2018. Writing up an overdue Speeding Ticket from early November, 2017….]

So, Wednesday night around the time when I’m counting the minutes before my head hits the pillow, the 16-year-old’s deep voice carries up the steps from his down stairs bunker, where he’s paused his evening communal gaming ritual with his fellow-headset-ted snipers …

What’s he talking about? My wife asks.

“Grab a flash light … meet you downstairs,” he yells up.

In a couple minutes I’m his passenger in the Old Subaru, unofficially his old Subaru, and he’s snaking us, under cover of darkness, through town.

“Gonna take us past the Pizza Hut, like they’ll have me do tomorrow.”

I affirm his choice.

We make the right at the Hut, then a left at the next light onto Oak Springs Road, and a left into the Big Lots Parking Lot. He takes us behind the Big Lots.

“Hope we don’t get arrested,” I say, kidding, but not really kidding.

In true Peter fashion, we were cramming the night before the Big Test.

He asks me to get out and stand in the grass and shine a light on the curb.

“One does not only parallel park in the sunshine,” I say in my best Yoda voice, remaining in the vehicle.

He huffs, but after 15 seconds of observing me not moving a muscle, slips it back into drive.

He makes his first approach … signals (nice)… passes the open space … stops … puts it in reverse … looks over his shoulder… eases off the break, turns … then cuts it … eases it forward. Exhales, then … cuts it backward … nudges it forward.

“They give three up and backs,” he says sheepishly.

I open the door, shine the flashlight on the gap between us and the curb. Not great, but …

It’d been a couple weeks since he last practiced, so a little bit of rust … forgivable.

He circles around for another pass. Pause. Reverse. He shows more patience this time before he makes his cut. Eases it parallel. Brings it forward … just once. I open the door. Shine the light. Two, maybe three, inches. 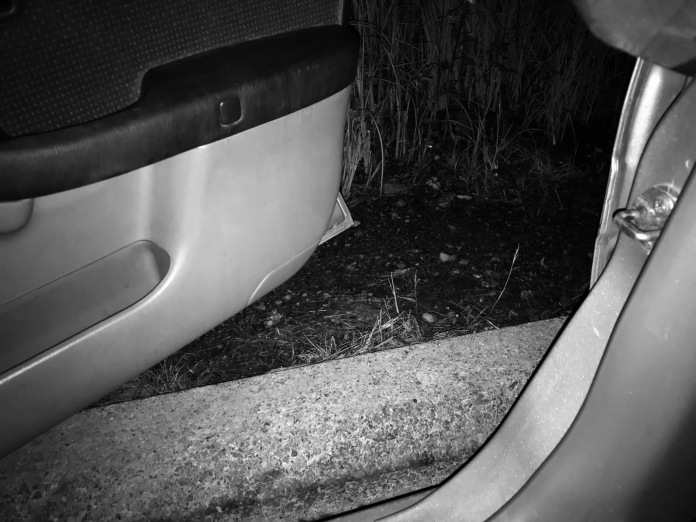 He pulls out, this time unable to resist flooring it (a command which takes the Old Subaru a few seconds to process) as he circles back around the empty parking lot. I just shake my head rather than admonish. I remember doing the exact same thing in my parents’ old Mercury Monarch when I first became master of my self-locomotion.

He makes another pass.

After a while, he starts whisper-narrating the voice in his head … “OK … watch this … this is going to be perfect … not yet … not yet … oh yes … nailed it … Are you watching this? … Gucci.”

For some reason I find this about the funniest thing in the world.

“Please promise me that you’ll do this with the guy tomorrow.”

He begins to whisper-address me as if I’m tomorrow’s ride-along … “Oh yes, prepare for perfection … you might want to take a picture of this officer … show the boys back at HQ … oh, look at this! Look at this! Textbook.”

Pretty soon he has us both belly laughing harder than I can recall us both laughing together in … well …  way too long.

I let him say when, and he insists on a few more passes, putting at least a baker’s dozen in his rear view mirror. It’s like the cut in the montage scene in Rocky III where Rocky masters the footwork under Apollo’s tutelage and throws in a flurry of practice punches just for good measure.

Then he drives us home in the next-to-last car ride we’ll take where I’m a necessary component.

The last one comes the following afternoon, when I accompany him to the Driver’s License Center. He admits to being nervous though he has no reason to be.

Karry, who left work so she could meet us at the center, texts me to remind him to remove the air freshener hanging from the rear view mirror. “Damn, your mother’s good, “ I gush to Peter as I pluck it down and put it in the glove box, until I realize she’s following in the car behind us (ha).

In the parking lot, I give him a handshake that he pulls into a hug, then I trade cars with Karry and head back home to field a work call.

I get jubilant texts from mother and son about 20 minutes later.

The following Friday night he heads out to meet some friends. Before he leaves, he pauses to kiss his mother on the cheek for the first time in his 5,960 days on the planet.

And it’s that gesture, and not the sound of him pulling the noisy Subaru up the driveway, that gives her pause.

“Didn’t see that coming,” she said, summing up the past 16 years, and every moment from this point forward, as she unconsciously rubbed the place on her cheek where her baby boy had just kissed her goodbye.

Sometimes when you are bracing for one chapter closing, it’s a footnote in the margin that gives you a glimpse of the ones to come.

2 thoughts on “‘Twas the Night Before ….” (Christmas in November)”