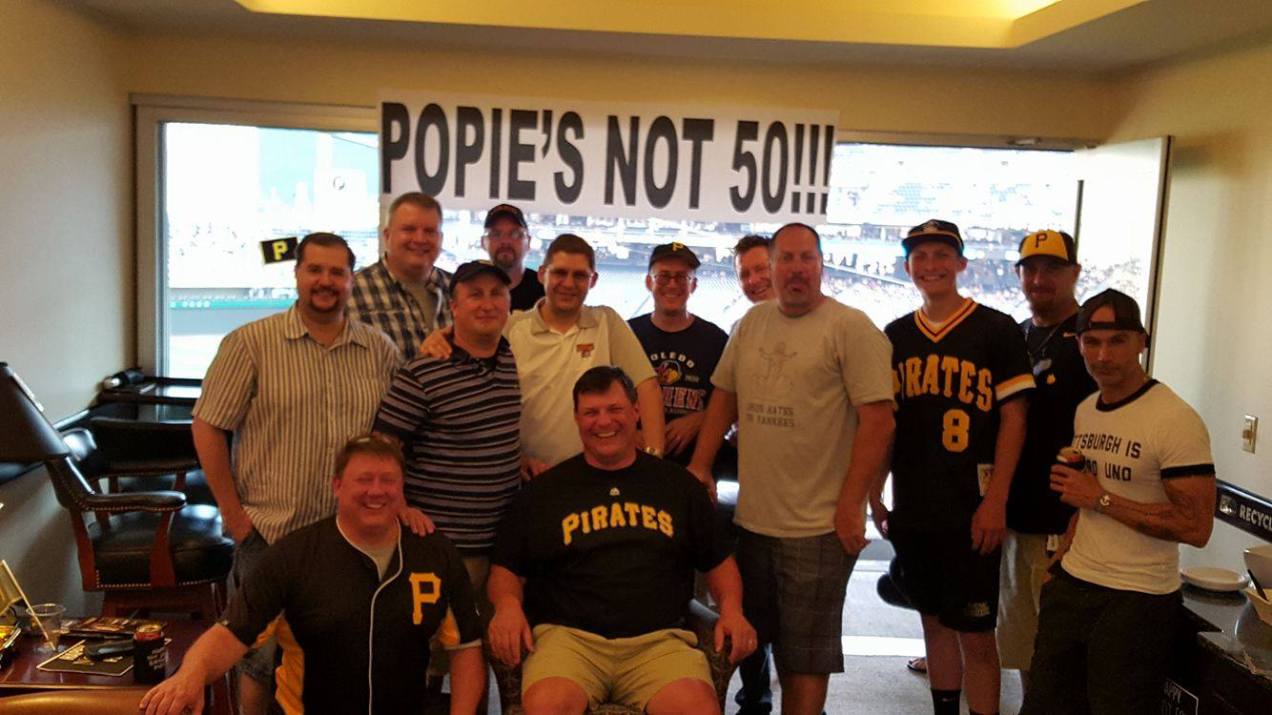 Behind these smiles are some stories, that, if you hold them close enough to your ear, you can still hear the beer-sticky basement floor of 311 North Richill Street in them.

That sacred address was responsible for us first colliding in our late teens, and, thus, gathering together last night at PNC Park, to celebrate one of our own NOT turning 50 (as the sign indicates).

That sacred address had a significant hand in at least four of us somehow convincing pretty college girls who totally should have known better to first dance with us, and eventually to marry us.

We solely owe last night’s gathering to an inspired idea from one of them (much love and thanks to Natalie).

Though it was intended as a gift to Popie, it was as much of one to the rest of us: a perfectly-timed reminder that no distance of time can diminish a good story’s ability to coax an on-demand laugh, head shake, hi-five, wince, or blush. And that we experienced each in equal and abundant measure in that golden (ZE) Chapter of our lives.

It was good to hear that my first college roommate’s high-pitched giggle is still in regular rotation (and still higher-pitched than my own). It was good to throw a hug around my last college roommate (and unapologetically go back for seconds). It was good to learn of (and meet) kids who are just blowing their parents away with the young men and women they are becoming, and also of children who are younger karma vessels for the ornerier among us.

It was good to see that Popie still lets his smile have the run of his face.

Used to be Friday nights would not end until the clock was deep into single digits, or before our butts hit the beer-sticky basement floor of 311 North Richill for a communal rendition of the theme from Hawaii-5-0.

So it was telling that the majority of us were exchanging goodbye handshakes and hugs by 10:30 (and well before the post-game fireworks)… in deference to our drives home and long-week-depleted energy reserves.

But, as the above picture proves, the smiles will keep.

And as the years have proven, so will the stories … and the bond.