Where the 16-year-old sees decay, I see … character.

And that’s just one of the dashboard instruments presently measuring the miles between us. 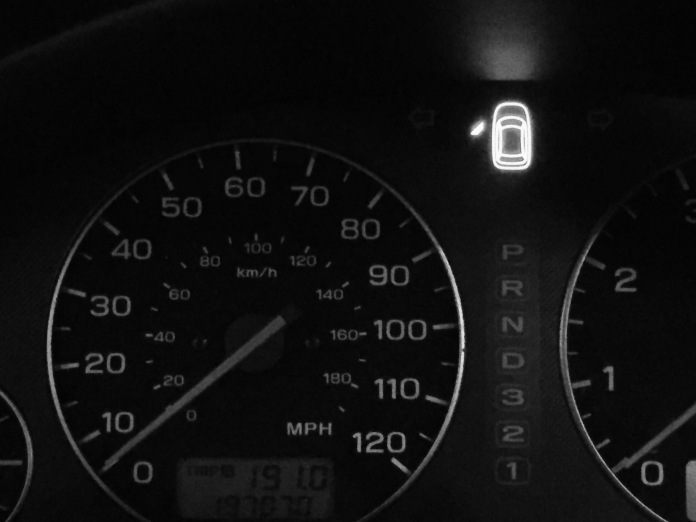 Exhibit A: my one working speaker. Back seat, driver’s side. Omits the right channel from the mix of every song. To me, this is feature, not flaw, as it delivers fresh, unconventional listens to even the dustiest, old songs spun by the saints-cum-DJ’s of WJPA, our national treasure of a local radio station. Oh, and if I hit a pothole just right, sometimes it jogs the wiring to temporarily give me back my front speakers.

And when you know something’s not gonna last, you appreciate it a whole lot more.

Then, there’s (Science) Exhibit B: my backseat bug collection. I’m irrationally proud that such a diverse mix of insects have chosen my rear window as their final resting place; their quest for either warmth or escape ending, sadly, if exquisitely, in greenhouse-effect irradiation, but with a pretty kickass view. In a purely coincidental symmetry, a pair of perfectly preserved 17-year locusts serve as bookends, framing an inspired collection that also includes spiders, flies, bees, a stinkbug, and a motley crew of as-yet-unidentifieds. As impressive as the current exhibit is, it pales in comparison to its predecessor, which was lovingly curated over a decade, until my disgusted family could take it no more and, while I was out of town, wiped away 10 years of, um, pure science with one long suck from a shop vac … under the guise of “surprising me” by thoughtfully cleaning my car inside and out. Still pissed about that one.

But, my capacity for, um, character is not without its limits. After enduring three consecutive sweaty, global-warming-induced southwestern PA summers with a busted air conditioner, I finally broke down last fall and fished one off the internet for my mechanic to install, realizing that my strategy of bringing Ziplocs full of ice cubes to work to nurse me through the ride home was kinda’ weird, and TOTALLY not conducive to carpooling. But let me tell you, when I pulled into traffic for the first time with every vent trained on me and the knobs wide open, feeling that frosty Freon breath smack me in the face for the first time in years, you better believe, I found my ass some WJPA, cranked my single speaker up to 11 and rattled THE SH*T out of my rear-window bug collection.

But what he doesn’t have at present is a clue (i.e. a funding strategy for said vision).

Which buys me a little more time.

When you know something’s not gonna last, you appreciate it a whole lot more.

We’ve been through a lot together. Rear-ended twice at stop lights (oddly, both times I was on the phone talking to the same person in our Chicago office), hit by a loping deer, crunched by a Cub Scout parent leaving a pack meeting, and, most recently, ‘kissed’ by a charming British woman in a rented RV, who crumpled my driver’s side while I was inside my favorite coffee shop and she was overestimating her parking abilities.

As a result of the resulting cosmetic surgeries over the years by the good folks at Budd Baer Collision, she doesn’t look all that bad despite having plowed through her13th Pennsylvania winter. Makes me think of all the crap Mom used to give Dad for his wrinkle-free face into his 80s, which was the sole product of the countless skin cancer procedures he’d endured.

Truthfully, what upset me most about my recent run-in with the rented RV is that the parking-challenged British lady didn’t aim a little south, as the old girl could use a facelift near the rear door and fender on the driver’s side, where rust is starting to get the upper hand.

But of all the miles, the ones I remain most grateful for are the 6,000 I inherited when I bought it sorta, but not really new in 2004. It was part of the dealership’s loaner program, but they still gave me the original warranty despite the miles already on it.

It allowed me to rationalize the purchase in my head as a used car, which was and remains kind of a big deal to me.

Used is all I can remember us ever owning growing up.

After our family’s flames of passion for Ford Pintos finally died down1, we made more than due with run-til-they-die old reliables like our 1980 Mercury Monarch (the tank I learned to drive on), followed by a 1988 Ford Taurus that Dad somehow managed to coax into the next millennium. We drove what Dad could afford, and were grateful to get where we wanted to go. The concept of vehicle as status symbol was relegated to my lovingly curated (and epic) Hot Wheels and Matchbox collection.2

So cars have always been practical conveyances between A and B to me. But that’s never kept me from developing an emotional (read: irrational) attachment to them.

I remember the day when the old Monarch died of natural causes outside our house. I went outside to pay my final respects. Sat in the driver’s seat one last time. Turned the ignition. Just an empty soft click. But rather than pulling the key out, I twisted it halfway back and tried the knob on the old AM radio3 to hear what, if anything, The Universe might have to say to me.

It did not disappoint.

Through the sweet crackle of static came the opening strains of the Beach Boys, “Don’t Worry, Baby.”

Because I would’ve openly wept, rather than, um, just misted up.

1Laurie’s brown hatchback, Missy’s blue version of the same that sported an unironic racing stripe, and the 1974 brown station wagon we literally rocked with an aftermarket 8-track tape player that is responsible for more of my musical education than I care to admit.

2Which my middle-aged self may or may not steal the occasional glance at.

3 Whose pre-set buttons I had lovingly curated: 3WS (oldies), WJAS (big band), KDKA (Pirates in the summertime), WMBS (the Uniontown station you can always count on to this day for true, indescribably epic, local color).

Unrelated-but-related, I remember The Universe speaking clearly to me once before through the Monarch’s AM radio. It was the day of my senior prom, after I picked up my rented tux from Ptak’s. I remember sitting at the light at Five Corners in downtown Uniontown, when I turned the knob to hear the opening strains of “Everybody Plays The Fool.”

Though it’s a small sample size, I’ve found The Universe to be pretty consoling when speaking through AM radio.

I carried on my parents’ legacy of buying what I could afford, when I procured my first car, a low-mileage used 1991 red Mercury Tracer station wagon, which I chose primarily to haul my drums to gigs. I remember test driving it to my house to make sure all my cases would fit before I signed the papers.

The Tracer was part of my, um, wedding dowry, when Karry and I got hitched in ’96.

By the time I got rid of her, pretty much everything was either falling off or had stopped working.4 I remember taking a measure of solace from the fact that every other Mercury Tracer I’d see on the road was visibly disintegrating in the same fashion mine was (faded door handles, bare metal around the windows where the rubber molding had fallen off, hub caps missing like teeth). I felt part of a fraternity …. of people-who-wished-they-could-afford-tinted-windows-so-no-one-would-see-them-driving-a-piece-of-sh*t-Mercury.

Which made my next purchase absolutely delightful … an even lower-mileage used 1994 red Mercury Tracer station wagon. Everything that was failing on my old car was in fine fettle on the new one. I’m pretty confident that no one in the history of ever was more giddy about purchasing a second used Mercury Tracer than this guy. I remember inviting Karry’s mother over to see my new car, which looked exactly like my old car.

My brother would be laughing right now because when I was growing up, I insisted on having two of everything so I could keep one in reserve. I think I’ve just always wanted the things I loved to last forever.

Big Red #2 lasted until January of 2005, when it earned me a whopping $700 on trade-in for the 2004 Subaru Legacy and its 6,000 miles, which secretly allowed me to honor Mom and Dad’s legacy of buying used cars. Knowing how hard Dad worked, logging 35+years with Sherwin Williams, I’m not sure I considered myself worthy of a new car in my mid-30’s. It’s weird to write that, but it’s true. Maybe a better way to put it is, if a used car was good enough for my Dad, then it was just fine for me, too.

I don’t expect Peter to feel the same way I do on the subject, but I’m also not giving him the choice, either.

On an otherwise forgettable Sunday evening during Steeler season this past winter, Karry looked at the burning clock and realized that our still-daunting to do list was not going to allow for any type of meal prep, so she gave Peter and me a green light to grab a bite out. I let him pick the place on one condition: that he refrain from plugging his ears with his headphones in the car, which is (a.) among my biggest pet peeves and (b.) pure survival instinct on his part, shielding him from my single-speaker oldie’s soundtrack … that I may or may not also chronically sing along to. But, respecting my leverage in the negotiation, he abided, and we hopped in the old Subaru, setting Max and Erma’s as our destination. As a courtesy to him, I resisted the urge to turn on the radio. We just chatted … about the Steelers, about basketball. Just stuff. And as we drove, and out of nowhere, it hit me. That, in a few months, this … me coaxing him into an impromptu boys bite to eat, and my being instrumental in his decision, as his sole means of escape slash transport … would cease to be a thing. This 16-years-in-the-making ritual would essentially go poof in the passing of a test, and the handing over of keys.

The last time a Dad coaxes a son into an impromptu, Sunday-night, hop-in-the-Subaru, you-pick-the-place-bite-to-eat.

And before I knew it on that nondescript Sunday evening, I found myself sitting at a stop light with tears welling in my eyes … grateful for the cover of darkness and reaching, in desperation, for the radio dial.

We ordered cheeseburgers (he went bacon). Loaded fries. Don’t-tell-Mom refills on root beer. Ice cream. Stole glances at the Sunday night NFL game. Cowboys, I think. The conversation was easy, like it always is when we’re out, just the two of us.

And by the time we found ourselves walking our full bellies across the parking lot to get back in the old Subaru — he in the passenger side, me in the driver’s side — this otherwise forgettable Sunday evening had suddenly became unforgettable.

Because when you know something’s not gonna last, you appreciate it a whole lot more.

3 thoughts on “The Miles Between”