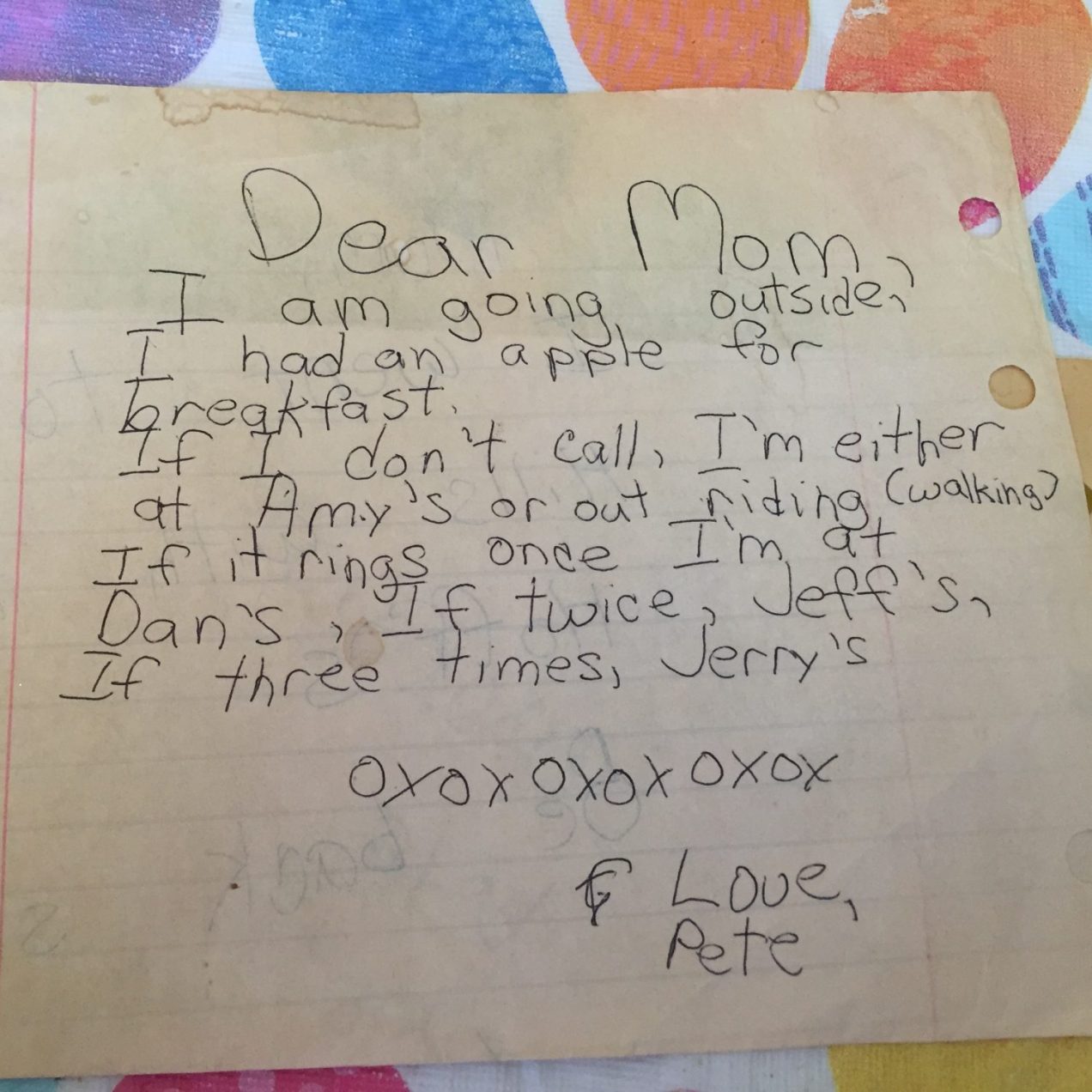 I found the above treasure while rummaging through one of the, um, dozens of containers harvested from the old house. (#momkepteverything)

Figuring I must’ve been eight? Nine? Probably the summertime.

Nothing and everything special about the day.

Nothing and everything special about the note.

Nothing and everything special about a neighborhood where you knew if you rode your bike long enough you’d find someone (awesome) to play with. I could’ve probably gone double digits on the rings before I ran out of friends.

It’s been three years since movers hauled the last of my belongings from the old house. Four since Mom passed.

And it’s all yesterday to me.

And why I’m writing you this letter.
__

Anna Margaret Riddell was 39 years old when I was born. Dad was 42. They had four kids in five years early in their marriage. Ten years later, I came along and surprised all involved parties.

She treasured the blur that was raising my older sisters and brother, though it sometimes came as tidal waves. Dad would tell the story of coming home from work one day in those early years and finding Mom nowhere to be found. He called out, got no response. Asked the kids … no idea. After scouring the house, he finally discovered her in the basement, standing on top of the washing machine. She was ‘hiding.’ She needed a break, and concluded that atop of the washing machine was the safest harbor.

Amidst the chaos of raising four kids on modest means, she found magic in the everyday, and made her own magic when none was to be found. A child of the Great Depression and World War II rationing, Mom learned to make do with what was at hand, and let imagination do the rest.  When my oldest sister Kim spoke at Mom’s memorial service, her headlines were the games Mom would invent out of thin air. “Escape the Ape” was a favorite.  Mom played The Ape, and the kids would scream as she chased them around the dining room table, and squeal themselves into uncontrollable laughter when she caught them.

My mother often confessed to me how proud she was to be an older mom. To have a baby in the house again was like a victory lap for her. It gave her the chance to re-live all the things she cherished, all the small moments, that went by so fast raising my older brother and sisters. And it gave me a chance to experience the wonder of making do with what was at hand, and letting imagination take care of the rest.

Case in point: When I was five or six, the doctor said I needed weekly allergy shots and assigned my Mom the task, which she hated, and for which she was completely unqualified. She couldn’t stand the thought of causing me pain, so she overcompensated by icing the hell out of my arm to numb it. By the time she’d poke me, the arm was frozen solid. I have these surreal memories of watching her jab me in vain, punctuating each needle stick with an exasperating crescendo of cuss words (Oh … shit … goddamnit … shit!), as tiny dots of blood painlessly sprung from my pin cushion of an arm. To this day I smile whenever I pass my hand over the meat between my right elbow and shoulder. It’s like cowhide for Mom’s years of tenderizing it. Anyway, while she disposed of the spent needles, she kept all the syringes … in giant Ziploc bags. We’d use them as poker chips in our  games of seven-card stud before kindergarten. I can still picture Mom deliberating her next move, a lit Salem between her fingers, nursing an ever shrinking pile of syringes (I learned to keep a keen eye on her as she was not above cheating to compensate for her meager poker skills), KDKA’s John Cigna chirping on her old GE AM radio. I’ve often thought what Children and Youth Services might have said if they happened upon our morning ritual.

To me, it was just what you did after cereal.

From the moment I came into this world, she was my One Great Encourager, especially when it came to my writing. She wanted to read every word I wrote. Kept most of it (see above neighborhood note). She was still reminding me in my 30s of a kindergarten writing assignment where evidently I stated a very compelling case that mice made the best pets.

“You should write more …” she’d always say. And she knew from good writing. She kept fat stacks of big yellow notebooks on top of the fridge, and filled them all with long letters to her sisters. For a couple years, Mom and her equally ornery sister Janet self-published a riotous family serial they called “The Johnson Gazette,” in which they lovingly and surgically skewered the entire family, including themselves, while keeping everyone up to speed on extended family happenings. It was our family’s version of The Onion (and every bit as funny).

As great and sincere an encourager as she was, I could not have been a poorer recipient. By the time I got to high school, I’d gotten pretty good at deflecting her compliments, and only got better (worse?) as I got older. Because she was ‘just my mom,’ I discounted the value of her encouragement in favor of the voice in my head who had me convinced I was never enough. I found it easier to cut myself off at the knees rather than give anyone else the chance. I’m still slowly digging myself out of that lifelong bunker of self-sabotage.

We can’t pinpoint the exact moment Mom began her slide into Alzheimer’s, but it happened sometime in her mid 70’s. Her older sister, Nora, had passed away with dementia after more than a decade spent in a nursing home. For the majority of those years, Mom kept a daily ritual of visiting her sister at Mt. Macrina. Even when Nora stopped recognizing her, long past the point where Nora wouldn’t have noticed or cared whether Mom visited or not, Mom kept showing up. She wanted to make sure that it was Nora who wasn’t forgotten.

In Mom’s case, we resolved to keep her home as long as we could, until we couldn’t. The day we placed her in a nursing home was the single-most most heartbreaking moment I ever hope to experience. I’ll never forget the turn-and-go, when we left her standing there with the attendant. Even in her diminished state, she was able to piece together what was happening. Even though it was the right thing to do. For her. For Dad.

She passed within a year.

Shortly before she died, by which time the disease had robbed her of everything, I experienced what I can only describe as an epiphany. I woke up one morning with a clarity I had never experienced before, or since.

I realized that all my life she had poured her Truth into me. It was not just part of me. It was the better part of me. And for that reason alone, it did not matter what I thought of myself. Didn’t matter whether I thought I was good enough. The fact was, she believed I was enough. Knew it in her bones. To deny that would be to devalue her Truth. And because Alzheimer’s robbed her of her ability to represent, to defend her Truth, it was now my responsibility to do so. To honor my mom’s Truth. To keep her light in the world. To bear her light to the world.

It placed a burden on my shoulders, while simultaneously lifting the biggest weight from them.

She loved what I wrote. Encouraged me to write more.

Since Mom’s passing, I began to trace a thread between her lifelong example and the moments in my life that fill and, sometimes, break my heart. I’ve gone from beating myself up for the things that I am not moved to write, to sifting the simple, everyday moments for treasure. I’ve found my best medicine in tending the humble garden of my immediate surroundings. The daily amazings: the postcards I’d write my baby boy when I had to travel for work; a kiss on the cheek from my best friend on Valentine’s day; reading out loud with my daughter on Saturday mornings at the coffee shop down the road; shooting hoops with my son in our driveway way past dark on a school night.

And when I’ve been brave enough to share these simple moments with others, I’ve heard from some sweet, kindred spirits who have felt similar things.

A few have told me, “You should write a book.” And for a long time, I dismissed those encouragements much in the same way I would my Mom’s.

Barring a breakthrough in medical science, there’s a reasonable chance that someday I may inherit The Family Curse that claimed Mom and now, three of her sisters.

For that reason alone, it’s become important – no, essential—  to press between these pages the things that I never want to forget. Just like Mom dutifully and reverently packing containers of memories from the old house. Maybe years from now my kids will have something to crack open and remember a simpler time.

But there’s an even greater reason that inspires me. To bear the light of the woman who first taught me that the greatest joy resides in the simplest of moments. That, in the end, time is the only currency that matters.

So I will make do with what I have, and let imagination take care of the rest.

Some forty years after my neighborhood note, Maggie Riddell’s baby boy is still writing her letters, to tell her where I am, and where I’ve been.

I had an apple for breakfast this morning (I swear).

Nothing and Everything has changed.